We used to haul our bikes on a trunk-mounted bike rack, but we recently got rid of our car, which meant we had no way to carry our bikes—short of loading them in the back of the van. 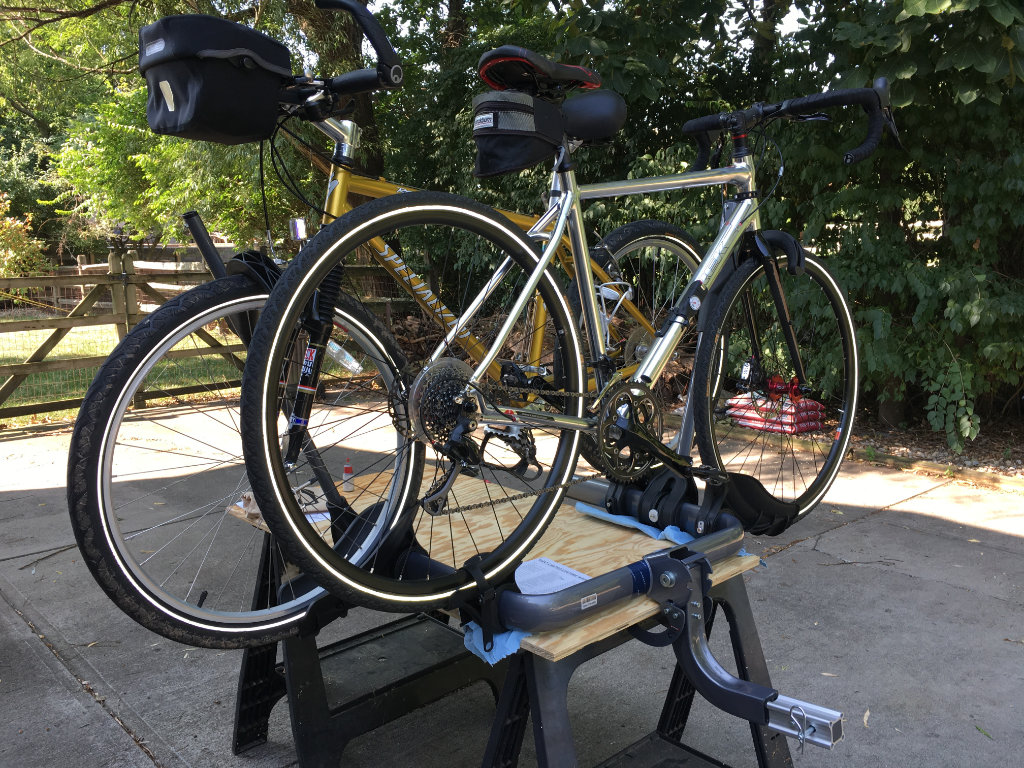 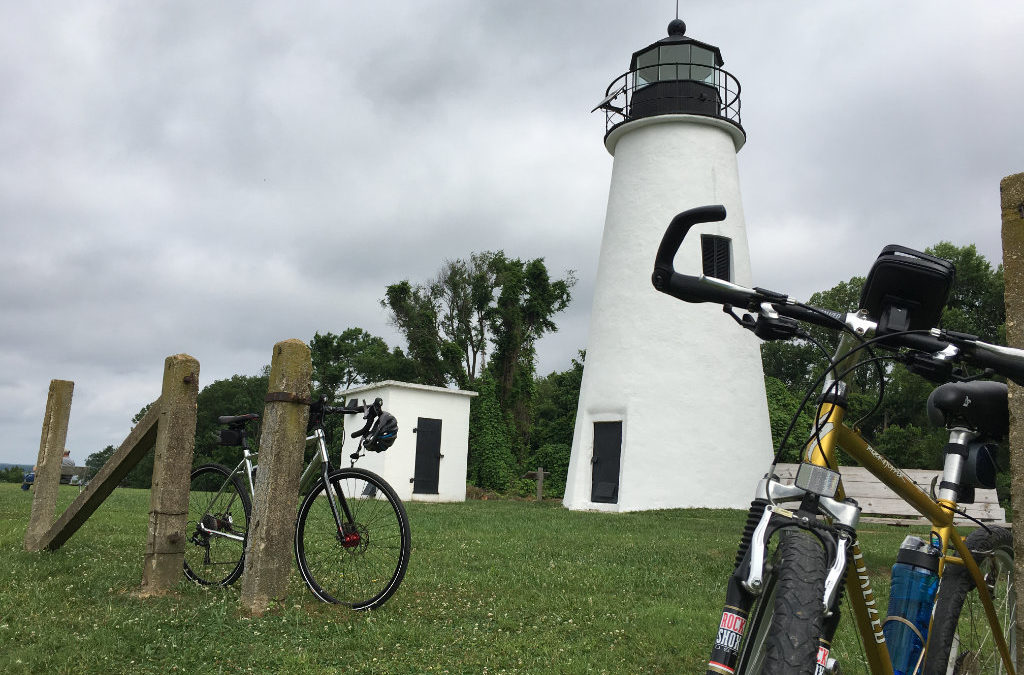 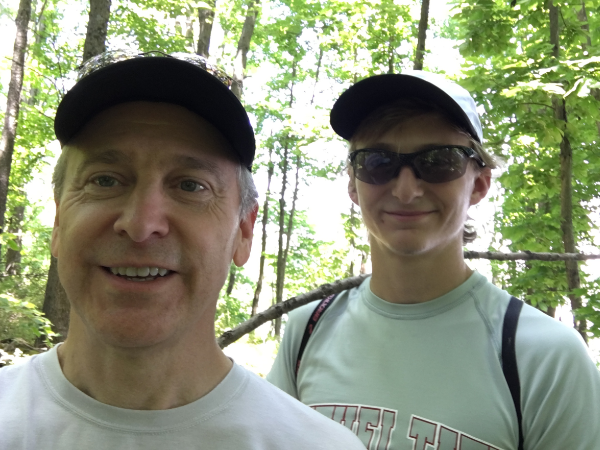 A Big Walk at Eastfork Lake

I had a tough week in terms of moving: Far too much time sitting at the computer. Since my wife had a trip coming up Friday and Saturday, I thought a nice long hike with my son, Jackson, would be cool. And the weather looked pretty good, too.

We’ve carried two bikes in the back of the minivan and it’s great for securing the bikes on a long trip, but it’s way too much work for a quick trip to the bike trail.

We decided the only thing that makes sense is a hitch-mounted rack, because whatever vehicle we choose for the future, we can install a hitch on it (although right now a BMW i3 hitch is elusive). And we found our hanging rack to be a bit sketchy at times, so we wanted a platform rack.

In my initial research, I had settled on the Thule T2 Pro XT 2 Bike Rack, accepting that a solid bike rack was going to cost $500 or more ($580 retail, but on sale at the time for $463). The Thule is a solid rack with great reviews. The Kuat NV 2.0 Bike Rack

was my second choice. It seemed a bit nicer and certainly looked better, but the $629 price tag (and no discounts to be found) put it below the Thule.

But then I discovered the Kuat Transfer 2 Bike Rack

. It wasn’t on sale, but at $289, it was very reasonable for a solid, hitch-mounted bike rack. That link will take you to Amazon, but I found mine at my local bike shop.

The only negative I could find in the reviews was that sometimes the finish was damaged in shipping. I noticed that Küat now puts protective tape on the frame where it might contact other parts in the box (see Figure 1). So I think that problem has been solved.

The LBS offered to sell me an assembled unit for no extra charge, but I wanted to give it a go (just for you, dear reader). Assembly was super easy and took me about 45 minutes, not rushing. I neither a wizard or a newbie with this stuff, so that time is probably typical. I didn’t see anything that required specific skills.

Once the rack was assembled, I needed a hitch! Our 2016 Honda Odyssey didn’t come with a hitch, so I had to put one on. This, too, was pretty easy. I installed a Draw-Tite 75270 Max-Frame Receiver in about an hour, but that’s doing it by myself, propping up either side on blocks instead of having a second pair of hands. The Odyssey has pre-drilled, threaded holes that line up with the hitch. It really is as simple as installing six bolts, with the only extra work being the removal of a small trim panel on one side.

The hitch is visible below the bumper cover. For a more integrated look, the Draw-Tite 76025 Max-Frame Receiver installs so that only the receiver box is visible. The price for that look is that installation is more complex: the bumper cover has to be removed and a small section of it cut out. It does look a lot nicer, but it definitely increases the time and skill level required.

While those links are for Amazon, I actually ordered my hitch from eTrailer. They have videos showing how to install each of these hitches on my exact vehicle. That helped me decide which way to go and the prices were similar.

Putting it all Together

Hitch installed and rack assembled, it was time to put it all together. As I had read, loading up our bikes is super easy. It takes almost no time at all. In fact, I timed it by making a video.

Those were my work clothes for installing the hitch, so no judging!

One of the things Tammy always hated about our trunk-mounted rack was the difficulty of accessing the trunk. If there were bikes on the rack, forget it. But even without bikes, the weight of the rack turned the trunk lid into a dangerous guillotine!

A hitch-mounted bike rack offers the possibility that you can still get into the back of the vehicle. I say possibility because two things have to be true for you to have access with bikes on the rack. First, the track has to tilt out of the way (some don’t). Second, there has to be enough room to clear the tailgate/liftgate/trunk lid as it opens.

Fortunately, with the Kuat Transfer 2 Bike Rack, the tilt function is super easy to use and there is plenty of clearance. That same, super-easy tilt function makes it easy for the rack to fold up when not in use. Also, when empty, the license plate is visible and the backup camera works great!

Update: We’ve since used the bike rack on our Honda Odyssey (and later Honda Pilot) as well as Edison, our Tiffin Wayfarer RV and it has never failed us. Still going strong in 2022! 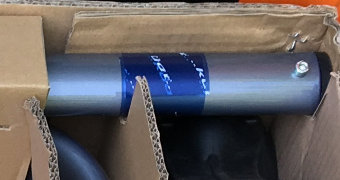 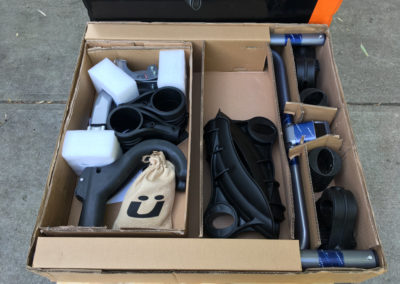 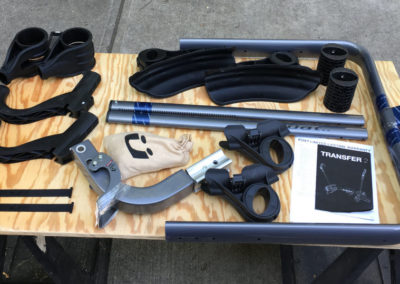 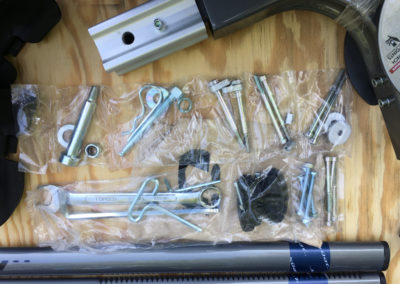 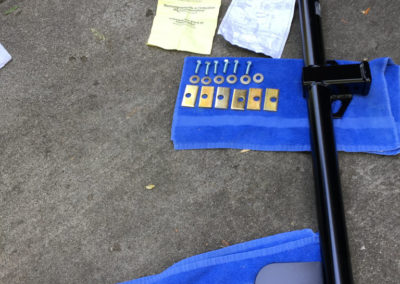 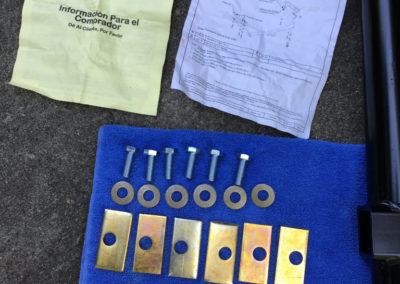 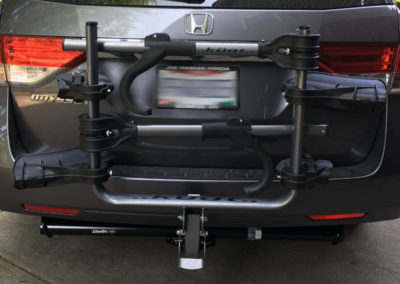 Hitch and Rack on Van